[preamble: this is not me writing against collecting data analysing user behaviour, including Tv viewing actions. I cherish the fact that Netflix recommends different things to different family members, and I'm happy for the iPlayer team to get some generic use data and recognise that nobody actually wants to watch Graham Norton purely from the way that all viewers stop watching before the introductory credits are over. What is important here is that I get things in exchange: suggestions, content. What appears to be going on here is that a device I bought is sending details on TV watching activity so as to better place adverts on a a bit of the screen I paid for, possibly in future even interstitially during the startup of a service like Netflix or iPlayer. I don't appear to have got anything in exchange, and nobody asked me if I wanted the adverts let alone the collection of the details of myself and my family, including an 11 year old child.] 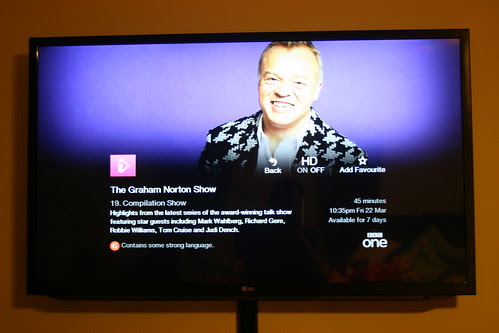 Just after Christmas I wandered down to Richer Sounds and bought a new TV, first one in a decade, probably second TV we've owned since the late 1980s. My goal was a large monitor with support for free to air DTV and HD DTV, along with the HDMI and RGB ports to plug in useful things, including a (new) PS3 which would run iPlayer and Netflix. I ended up getting a deeply discounted LG Smart TV as the "smart" bits came with the monitor that I wanted.

I covered the experience back in March, where I stated that I felt that smart bit was AOL-like in its collection of icons of things I didn't want and couldn't delete, it's dumbed down versions of Netflix and iPlayer, and its unwanted adverts in the corner. But that's it, the netflix tablet/TV integration compensates for the weak TV interface, and avoids the problem of PS3 access time limits on school nights, as the PS3 can stay hidden until weekends.

Last week I finally acceded to the TV's "new update available" popups, after which came the "reboot your TV" message. Which I did, to then get told that I had to accept an updated privacy policy. I started to look at this, but after screen 4 of 20+ gave up, mentioning it briefly on that social networking stuff (who give me things like Elephant-Bird in exchange for their logging my volunteered access -access where I turn off location notification in all devices).

I did later regret not capturing that entire privacy policy by camera, and tried to see if I could find it on line, but at the time, the search term "LG SmartTV privacy policy" returned next to nothing apart from a really good policy for the LG UK web site, which even goes into the detail of identifying each cookie and its role. I couldn't see the policy after a quick perusal of the TV menus, so that was it.

Only a few days later, Libby Miller pointed me at an article by DoctorBeet, who'd spun wireshark up to listen to what the TV was saying, and so showing how his LG TV is doing an HTTP forms  POST to a remote site of every channel change, as well as details on filenames in USB sticks.

This is a pretty serious change on what a normal television does. DoctorBeet went further and looked at why. Primarily it appears to be for advert placement, including in that corner of the "smart" portal, or a start time after you select "premium" content like iPlayer or netflix. I haven't seen that which is good -an extra 1.5MB download for an advert I'd have to stare through is not something I'd have been happy with.

Anyway, go look at his article, or even a captured request.

I'm thinking of setting up wireshark to do the same for an evening. I made an attempt yesterday but as the TV is CAT-5 to a 1Gbs hub, then an ether over power bridge to get into the base station, it's harder than I'd thought. My entire wired network is on switched ports so I can't packet sniff, and the 100 MB/s hub I dredged up from the loft turned out to be switched too. That means I'd have to do something innovative like use the WEP-only 802.11b ether to wifi bridge I also found in that box, hooked up to an open wifi base station plugged into the real router. Maybe at the weekend. A couple of days logs would actually be an interesting dataset even if it just logs PS3 activity hours as time-on-HDMI-port-1

What I did do is go to the "opt out of adverts" settings page DoctorBeet had found, scrolled down and eventually followed some legal info link to get back to the privacy settings. Which I did photo this time, and which are now up on Flickr. 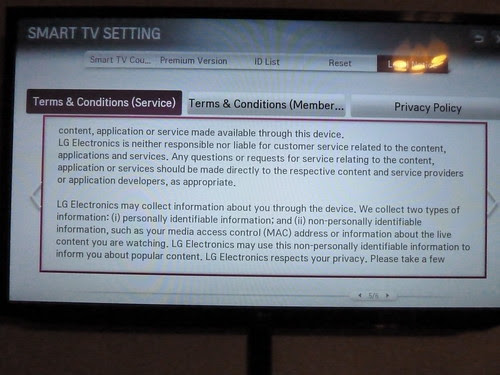 That's an interesting concept, which I will get back to. for now. note that that specific phrase is not indexed anywhere into BigTable, implying it is not published anywhere that google can index it.

If you have issues, don't use the television

Anyway. there's a lot more slides. One of them gives a contact, who when  you tap in to LinkedIn not only shows that he's the head of legal at LGE UK,  that he's one hop away from me: datamining in action.

Alternatively: If I had the TV viewing data of a large proportion of a country, how would I deanonymize it?

The answer there is straightforward, I'd use the work of [2004 Arvind Narayanan and Vitaly Shmatikov], Robust De-anonymization of Large Sparse Datasets.

In that seminal paper, Narayanan and Shmatikov took the anonymized Netflix dataset of (viewers->(movies, rankings)+), and deanonymized it by comparing film reviews on Netflix with IMDb reviews, looking for reviews that appeared on IMDb shortly after a Netflix review with ratings matching/close to that a Netflix review. They then took the sequence of a viewers' watched movies and looked to see if a large set of their Netflix review met that match critera. At the end of which they managed to deanonymize some Netflix viewers -correlating them with an IMDb reviewer may standard deviations out from from any other candidate. They could then use this  match to identify those movies which the viewer had seen and yet not reviewed on IMDb.

The authors had some advantages, both netflix and IMDb had reviews, albeit on a different scale. the TV details don't so the process would be more ad-hoc


I don't know how many matches you'd get here -as the paper shows, it's the real outliers you find, especially the watchers of obscure content.

Even so, the fact that it is would to possible to identify at least one viewer this way shows that TV watching data is personal information. And I'm confident that it can be done, based on the maths and the specific example in the Robust De-anonymization of Large Sparse Datasets paper.

Conclusion: irrespective of the cookie debate, TV watching data may be personal -so the entire dataset of individual users must be treated this way, with all the restrictions on EU use of personal data, and the rights of those of us with a television.

The cracks all the way to the top of the small feudal island-state of Great Britain became visible this week, as a show trial and exposure of police and state security activities exposed the means the regime retains power. 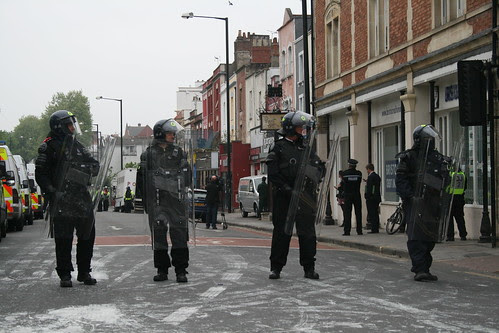 For centuries Britain has endured a caste system, where those at the bottom had little education or career prospects, while those in the ruling "upper class" lived an entirely separate life -a life that began with a segregated education from their school, "eton", to their universities, oxford and cambridge and then employment in "the city" or political power in "parliament". Similar to the French Polytechniques system, while it guarantees uniformity and consistency amongst the hereditary rulers, the lack of diversity reduces adaptability. Thus the elite of this island have had trouble leading it out of the crises that have befallen it since 2008 -when it became clear that it offshore tax-haven financial system had outgrown the rest of the country. The emergency measures taken after the near-collapse of the countries economy have worsened the lives for all outside a small elite -exacerbating the risks of instability.

This month some of the curtains on the inner dealings of that ruling oligarchy were lifted, giving the rest of the country a glimpse into the corrupt life of the few. A show trial of the editors of a newspaper showed how the media channels -owned by a few offshore corporations- were granted free reign by the rulers, in exchange for providing the politicians with their support and the repetition of a message that placed the blame for the economic woes on the previous administration and outgroups such as asylum seekers and "welfare scroungers".

A disclosure of how the media were creating stories based on intercepting the voicemail messages of anyone of interest forced the government to hand a few of the guilty to the legal system -while hoping that the intiminate relationship between these newspaper editors and those in government do not get emphasised. Even so, this scandal has already forced the government to postpone approving a transaction that would give a single foreign oligarch, Murdoch, near absolute control of television and the press. Public clamour for some form of regulation of the press has also forced the regime to -reluctantly- add some statuatory limitations to their actions. It remains to be see what effect this has -and whether the press will exact their revenge on the country's rulers.

A few miles away, in the country's "parliament", the MPs exercised some of their few remaining privileges of oversight. The "plebgate" affair represented a case in which the feared police, "the Met" were grilled over their actions. Normally the Met is given a free hand to suppress dissent and ensure stability across the lower castes, but in "plebgate" the police were caught on CCTV and audio recordings making false accusations about one of the rulers. The thought that "the Met" could turn on their masters clearly terrifies them: the grilling of the police chiefs represents the public part of a power struggle to define who exactly is in charge.

Alongside this, the heads of the state security apparatus were interviewed over the increasingly embarrasing revelations that they had been intercept the electronic communications of the populace of the country, "the subjects" as they are known. This comes as no surprise to the rulers, who recognise that with the mainstream media being part of the oligarchy, any form of organised dissent will be online. Monitoring of facebook and google is part of this -during the 2011 civil unrest, calls even were made by the press and politicians to disable some of these communications channels. Again, the rulers have to walk a fine line between appearing concerned about these revelations, while avoiding worsening those relationships which are critical for keeping the small hereditary elite in power.

Given the interdepencencies between the rulers, the press and the state security forces, no doubt these cracks will soon be painted over. Even so, irrespective of the public facade, it may be a while before the different parts of what is termed "the establishment" trust each other again.