Safety in High Energy Physics and US Visitor paperwork

The NYT article on US immigration and ESTA makes me think that I should publish the safety lecture from the November 2010 Bristol Hadoop workshop, which was hosted by Bristol University Physics Dept. All signs in the slides are from their physics building, except for the last slide.


The last form is genuine it's hosted on the state department as the 1405-0134 form, I've had to fill it in a couple of times. Things I like about it
Because form explicitly says "nuclear experience", the HEP folk can get away with saying no. Saying you work with antimatter or neutron beams is not the thing you want to do at an immigration border.

While taking the on-site photos I got cornered by the University site security people for taking pictures with an SLR as it is "what the police warned them about". I didn't point out to them that if I wanted to take photos discreetly I'd use a camera phone or my HD-resolution cycle helmet cam on the bike helmet I'd carry nonchalantly under one arm -as that would only make them think I was planning something. Better to stick to the idea that enemies of the state use SLRs -so anyone with an SLR is potentially an enemy. Anyway, I didn't argue, just sat there, let them look at the photos while verifying that I was visiting the physics dept. At some point the chief minion started talking about deleting one of the paper sign listing how many gigabequerels they had. Ignoring the fact that such info is available online, having that photo deleted would have wasted 15 minutes of my life once I got back home and undeleted it. At least they didn't ask to look at the laptop, as that would have created conflict.

Returning to ESTA, here's something funny about it. There is no online way to see if it expires. Apparently you get a renewal email, but I've never seen one, and last november I tried to see if mine was still valid before flew to the US. I didn't get a reply until after I'd flown out:


Dear Stephen,
I am sorry we were not able to respond to your question sooner. Hopefully you did not have any problems traveling to the US, but please write back if you still need help.


That is -we hope it hadn't expired yet because you'd have been stuffed if it had.
Posted by SteveL at 17:33 No comments: 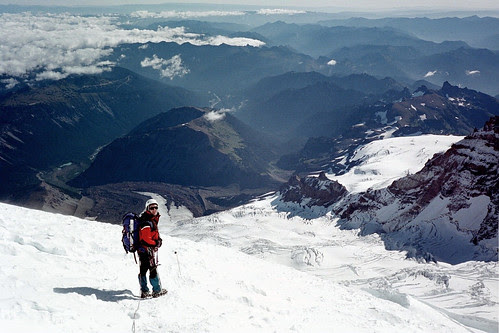 People say "should you run Hadoop in the cloud?". I say "it depends".

I think there is value in Hadoop-in-cloud, I talked about doing it in 2010 at Berlin Buzzwords 2010; since then I've had more experience with using Hadoop and implementing cloud infrastructures.

Some examples of where Hadoop's assumptions diverge from that of cloud infrastructures:


A lot of these are tractable, you just have to put in the effort. The Stratosphere team in Berlin are doing lots of excellent work here, including taking a higher level query language and generating an execution plan that is IaaS aware -you can optimise for fast (many machines) or lower cost (use less machines more efficiently).

In comparison, a physical cluster:
If you are generating data in house, in house clusters make a lot of sense.
This is why I say "it depends" -it depends on where you collect your data and what you plan to do with it.

As for the way Hadoop doesn't currently work so well in such infrastructures, well the code is there for people to fix. It's also a lot easier to test in-cloud behaviour, including resilience to failure, than it is with physical clusters.