It looks like the Russians interfered with the US elections, not just from the alleged publishing of the stolen emails, or through the alleged close links with the Trump campaign, but in the social networks, creating astroturfed campaigns and repeating the messages the country deemed important.

Now the UK is having an election. And no doubt the bots will be out. But if the Russians can do bots: so can I. 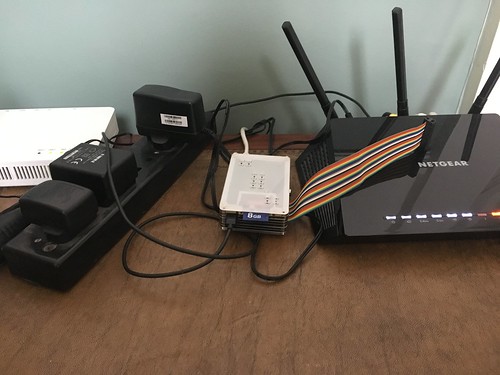 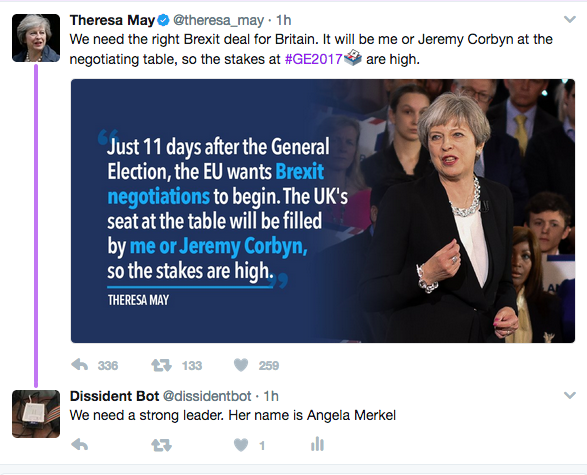 It offers:
It's the first Ruby script of more than ten lines I've ever written; interesting experience, and I've now got three chapters into a copy of the Pickaxe Book I've had sitting unloved alongside "ML for the working programmer".  It's nice to be able to develop just by saving the file & reloading it in the interpreter...not done that since I was Prolog programming. Refreshing.

Without type checking its easy to ship code that's broken. I know, that's what tests are meant to find, but as this all depends on the live twitter APIs, it'd take effort, including maybe some split between Model and Control. Instead: broken the code into little methods I can run in the CLI.

As usual, the real problems surface once you go live:
The loopback code is the most annoying bug; nothing too serious though.

The DM CLI is nice, the fact that I haven't got live restart something which interferes with the workflow. 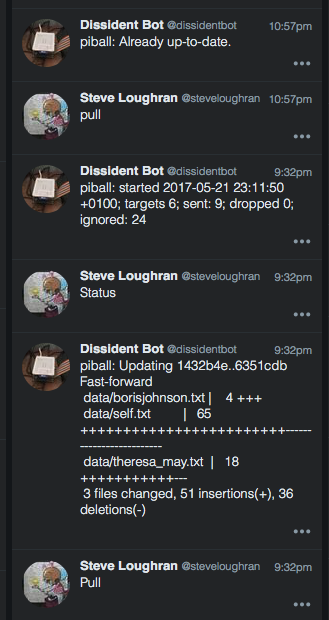 Because the Pi is behind the firewall, I've no off-prem SSH access.

The fact the conservatives have blocked me, that's just amusing. I'll need another account.

One of the most amusing things is people argue with the bot. Even with "bot" in the name, a profile saying "a raspberry pi", people argue. 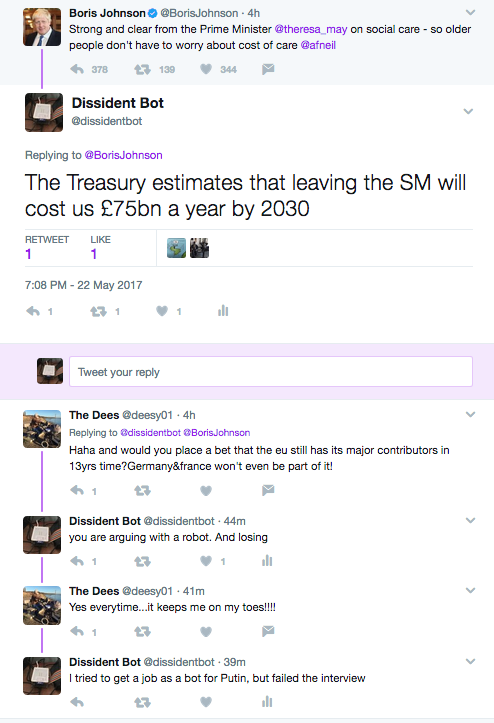 Overall the big barrier is content.  It turns out that you don't need to do anything clever about string matching to select the right tweet: random heckles seems to blend in. That's probably a metric of political debate in social media: a 350 line ruby script tweeting random phrases from a limited set is indistinguishable from humans.

I will accept Pull Requests of new content. Also: people are free to deploy their own copies. without the self.txt file it won't reply to any random mentions, just listen to its followed accounts and reply to those with a matching file in the data dir.

Email ThisBlogThis!Share to TwitterShare to FacebookShare to Pinterest
Labels: code

The NHS gets 0wned

Friday's news was full of breaking panic about an "attack" on the NHS, making it sound like someone had deliberately made an attempt to get in there and cause damage.

It turns out that it wasn't an attack against the NHS itself, just a wide scale ransomware attack which combined click-through installation and intranet propagation by way of a vulnerability which the NSA had kept for internal use for some time. 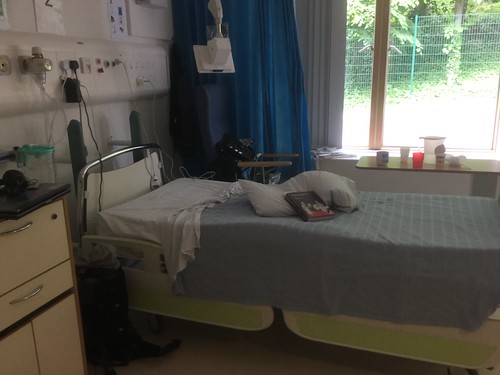 The NHS got decimated for a combination of issues:
The overall combination then is: a large network/set of networks with unsecured, unpatched targets were vulnerable to a drive-by attack, the kind of attack, which, unlike a nation state itself, you may stand a chance of actually defending against.

In servers this can be justified, though it's a shame that SMB sucks as a protocol. Desktops? It's that eternal problem: these things get stuck in as "features", but which sometimes come to burn you. Every process listening on a TCP or UDP port is a potential attack point. A 'netstat -a" will list running vulnerabilities on your system; enumerating running services "COM+, Sane.d? mDNS, ..." which you should review and decide whether they could be halted. Not that you can turn mDNS off on a macbook...

With many staff, email clickthrough is a function of scale and probability: someone will, eventually. Probability always wins.

This is a complication on the "patch everything" story because every update to a server needs to be requalified. Why? Therac-25.

What's critical here is that the NHS was 0wned, not by some malicious nation state or dedicated hacker group: it fell victim to drive-by ransomware targeted at home users, small businesses, and anyone else with a weak INFOSEC policy This is the kind of thing that you do actually stand a chance of defending against, at least in the laptop, desktop and server.

Defending against malicious nation state is probably near-impossible given physical access to the NHS network is trivial: phone up at 4am complaining of chest pains and you get a bed with a LAN port alongside it and told to stay there until there's a free slot in the radiology clinic.

What about the fact that the NSA had an exploit for the SMB vulnerability and were keeping quiet on it until the Shadow Brokers stuck up online? This is a complex issue & I don't know what the right answer is.

Whenever critical security patches go out, people try and reverse engineer them to get an attack which will work against unpatched versions of: IE, Flash, Java, etc. The problems here were:
The cost of developing the exploit was reduced, and the target space vast, especially in a large organisation. Which, for a worm scanning and attacking vulnerable hosts, is a perfect breeding ground.

If someone else had found and fixed the patch, there'd still have been exploits out against it -the published code just made it easier and reduced the interval between patch and live exploit

The fact that it ran against an old windows version is also something which would have existed -unless MSFT were notified of the issue while they were still supporting WinXP. The disincentive for the NSA to disclose that is that a widely exploitable network attack is probably the equivalent of a strategic armament, one step below anything that can cut through a VPN and the routers, so getting you inside a network in the first place.

The issues we need to look at are
Here the MSFT "tomahawk" metaphor could be pushed a bit further. The US govt may have tomahawk missiles with nuclear payloads, but the ones they use are the low-damage conventional ones. That's what got out this time. 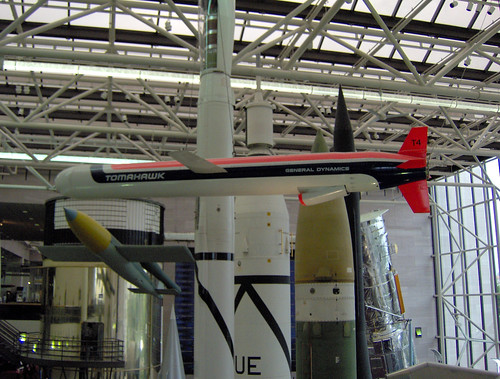 One thing that MSFT have to consider is: can they really continue with the "No more WinXP support" policy? I know they don't want to do it, the policy of making customers who care paying for the ongoing support is a fine way to do it, it's just it leaves multiple vulnerabilites. People at home, organisations without the money and who think "they won't be a target", and embedded systems everywhere -like a pub I visited last year whose cash registers were running Windows XP embedded; all those ATMs out there, etc, etc.

Windows XP systems are a de-facto part of the nation's critical infrastructure.

Having the UK and US governments pay for patches for the NHS and everyone else could be a cost effective way of securing a portion of the national infrastructure, for the NHS and beyond.

(Photos: me working on SICP during an unplanned five day stay and the Bristol Royal Infirmary. There's a LAN port above the bed I kept staring at; Windows XP Retail packaging, Smithsonian aerospace museum, the Mall, Washington DC)
Posted by SteveL at 10:47 No comments:

Is it time to fork Guava? Or rush towards Java 9? 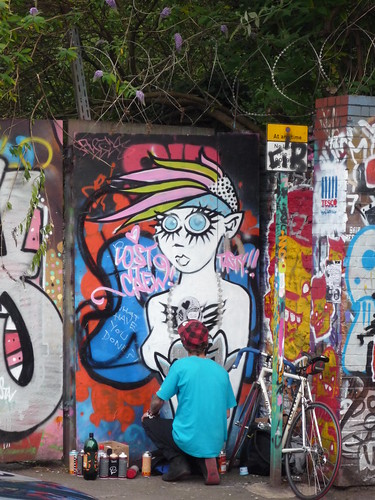 Hadoop 2.x has long-shipped Guava 14, though we have worked to ensure it runs against later versions, primarily by re-implementing our own classes of things pulled/moved across versions.


Hadoop trunk has moved up to Guava 21.0, HADOOP-10101.This has gone and overloaded the Preconditions.checkState() method, such that: if you compile against Guava 21, your code doesn't link against older versions of Guava. I am so happy about this I could drink some more coffee.

Classpaths are the gift that keeps on giving, and any bug report with the word "Guava" in it is inevitably going to be a mess. In contrast, Jackson is far more backwards compatible; the main problem there is getting every JAR in sync.

Shade Guava Everywhere
This is going too be tricky to pull off. Andrew Wang has taken on this task. this is one of those low level engineering projects which doesn't have press-release benefits but which has the long-term potential to reduce pain. I'm glad someone else is doing it & will keep an eye on it.

Rush to use Java 9
I am so looking forward to this from an engineering perspective:

Pull Guava out
We could do our own Preconditions, our own VisibleForTesting attribute. More troublesome are the various cache classes, which do some nice things...hence they get used. That's a lot of engineering.

Fork Guava
We'd have to keep up to date with all new Guava features, while reinstating the bits they took away. The goal: stuff build with old Guava versions still works.

There's also the fact that once we use our own naming "org.apache.hadoop/hadoop-guava-fork" then maven and ivy won't detect conflicting versions, and we end up with > 1 version of the guava JARs on the CP, and we've just introduced a new failure mode.

Java 9 is the one that has the best long-term potential, but at the same time, the time it's taken to move production clusters onto Java 8 makes it 18-24 months out at a minimum. Is that so bad though?

I actually created the "Move to Java 9": JIRA in 2014. It's been lurking there, Akira Ajisaka doing the equally unappreciated step-by-step movement towards it.

Maybe I should just focus some spare-review-time onto Java 9; see what's going on, review those patches and get them in. That would set things up for early adopters to move to Java 9, which, for in-cloud deployments, is something where people can be more agile and experimental.

(photo: someone painting down in Stokes Croft. Lost Crew tag)