A Small Divided Island on the Edge of Europe 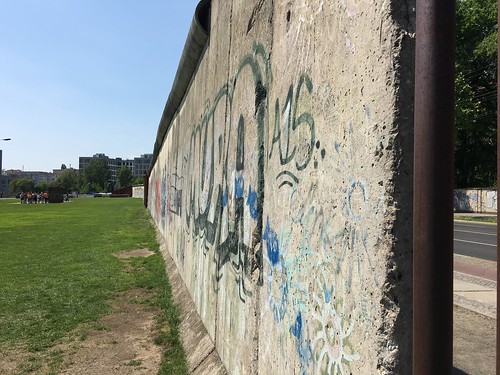 One of the things we got to do we moved back from the US to the UK was to introduce our 3 year old son to his inheritance: Europe. The first trip: a flight to Nice, stay in Antibes, the town on the Cote D'Azur where my father lived for the last 30+ years of his life, where I used to go for holidays in my late teens, my first experience of spending time in France. We drove to Grenoble, stayed with some UK friends who had moved to work there, attended a wedding between an Italian friend and former colleague, now also resident in Grenoble, and UK Army officer, stationed in Germany.

Later that year, the full road trip: Eurotunnel to France, overnighting in Namur, Belgium. Then down through Luxembourg and on to Germany, ending up south of Munich -two countries a day. Staying with an Irish & German couple, again, friends from Bristol. Introducing Alexander to the German lifestyle, heading into Austria for his first Alpine hut experience. Other holidays, other places: Italy, Berlin, Amsterdam. He, like us, had the whole of Europe waiting for him when he grew up.

And now? The UK has voted to put a wall between itself and the rest of the continent. A lot of the voters think they will are putting a wall up to keep people out. Maybe but the consequence is a wall keep the children in.

For people struggling to survive in the bits of the country where the heavy industry used to be, that's not exactly something that matters to them. Competition for minimum wage, zero hour jobs, the repeated message that "it's all the fault of Europe", you can't fault them. When your life is fucked -you've got nothing to lose. Unfortunately for them: this isn't going to solve their problems. They were lied to by politicians who knew they were being dishonest and by papers that told them Brexit was the answer. Wherein lies a danger: if a manifesto of xenophobia and cutting yourself from your trading partners doesn't deliver, what's the next policy action going to be? My fear: ramping up the hate.

It doesn't bode well for the UK, and it's a warning for the US: hate, fear and unrealistic promises can attract to voters who feel forgotten by what appears a distant political group unconcerned with the problems of vast swathes of a country.

B. and I are off to France & Spain for a cycling holiday next Saturday. Our son will be staying with his (Scottish) grandmother in Portsmouth, on the South Coast of England. Where before he could look out from the seashore and see a continent waiting for him, now the only thing he'll see waiting for him out there is the Isle of Wight.

Email ThisBlogThis!Share to TwitterShare to FacebookShare to Pinterest
Labels: politics

Whenever I walk down to the Pop-up Patisserie on Stokes Croft to buy my Pain-aux-Amandes for drinking with my morning Illy Coffee, I cross a lovely little square on the King's Down, above Nine Tree Hill,

This lovely square is actually a war grave. A thirteen gun fort was built there during the English Civil War, a fort captured by the Royalists in 1643. in 1645 it fell to Cromwell's New Model Army —and everyone in the fort killed.


Looking at the genteel civility of these georgian houses built 150 years after the war, it's hard to conceive of what happened here, but it did.

That is: by the end of the Civil War, people in the country side were prepared to kill fellow citizens "without quarter". No expansionist battle for territory between cultures, language speakers, or the like. Simply, initially, differing beliefs —going from abstract details to executions in under five years.


Perhaps the ideas were so fundamentally incompatible that yes, killing the holders of the conflicting beliefs was the only possible way to have peace in the land —the civil war being thus the conflict between ideas instantiated. Or what was an initially a metaphorical battle over the notion of sovereignty at the level of Parliament and the King, created a conflict which resulted in a war where soldiers on the ground were told what they were fighting for in terms they could understand and kill for —even if bore no relation to those root cause.

Which brings me to the present day.

UKIP are not the National Socialist German Workers’ Party. Farage doesn't appear to have any leanings towards fasicm(*). He's just a racist populist who complains about being picked on when everyone denounces his poster which was "unfortunate" to come out the day an elected MP —something Farage has never achieved, despite many attempts— was killed by someone far to the right of UKIP. That alleged killer is unlikely to have been directly radicalized by the runup to the #Brexit vote —though one must suspect, he wouldn't have been voting for remain.

Because what the Leave campaigns have come down to, in the end, is anti-European racism: it is for Brexit what anti-Scots advertising was the conservative party in the 2015 UK elections. Except the Brexit message is coming at the end of months and months —years, even of press hate directed at "migrants" and "refugees", "swarms of them". That's where the hate has been nurtured: not in a few weeks in the summer of 2016, nor even in a poster which was appalling enough before what took place later that day. It's in the front pages of the Daily Mail and the Daily Express every morning. When I nip round to my local shop to buy a baguette, I have to struggle to avoid making eye contact with some half-page-height headline text above a photo, text invariably starting with "MIGRANTS", or, failing that, MUSLIMS

That's what's closest to Nazism: the relentless selling of hate against a group of people. Here though, possibly more for profit than any ideology.

Yet that hate they sell seeps in the minds of people —that's what would have radicalized the alleged killer. The Daily Mail.

And what the Vote Leave campaign has done is legitimised that hate: made it OK. And irrespective of the outcome of the referendum, it's going to remain.

If Britain votes to leave, post-whatever economic shocks hit our economy and exchange rate, while the negotiations go on with the EU about how we should still be friends, all those people worked up into a hate of the foreigner will be demanding they get what they were promised. It's going to be fundamentally unpleasant for anyone considered "not one of us". I don't know whether me and my family meet that criteria: I do know I'd be exercising my ancestral right to an Irish passport later on in June, not just for me —but for my son. Because I'm don't know if a joint UK/US citizen of Irish/Scottish/Gujarati descent would be on the UKIP approved list —or if he wants to live in a country where UKIP has influence. And while that US passport gives him one exit option —things don't look good there either.

If, as I hope happens, Britain votes to stay in the EU, all that stirred up hate will remain.

Assuming it's a close vote, the losers aren't going to say "oh, well, never mind" —there's going to be a lot of angry resentment. And the "remain" coalition have helped stoke up that anger and resentment, with their dire predictions of doom and devastation. Disappointed Leave voters and activists are going to feel their victory was stolen, and are unlikely to go away. Perhaps hopefully, Farage himself will —and then be forever remembered for "that poster"; his rivers of bloodˆ epitath.

Those in the Conservative Party may form a majority of MPs, as well as members —they aren't going to away: expect a coup attempt later on in the year, with Boris waiting to graciously accept the crown.

And the rest of the nation? Those papers are going to keep churning out their hate, now with "if only they'd listen", and "we warned you" accompanying each article of lies, exaggeration and hate. People are going to keep reading them —and keep getting angry.

Whatever happens, it's not going to be pleasant.

(*) Do note, however, that his mock attempt to resign as leader of the party and it's refusal to be accepted by the party does mimic that of Hitler's threat to resign in 1921 from the then-nascent NZ party. (The Rise and Fall of the Third Reich, Shirer, 1961, Chapter 2).

[Photo, Freemantle Square, Kingsdown, Site of Prior's Fort, 1642-1645; a small plaque in the centre of the green remembers the dead. Nine-tree hill got its name at the time, as did the nearby Cromwell Road].
Posted by SteveL at 22:54 No comments:

Email ThisBlogThis!Share to TwitterShare to FacebookShare to Pinterest
Labels: politics

No, you didn't want that stack trace


Tail of a test run. 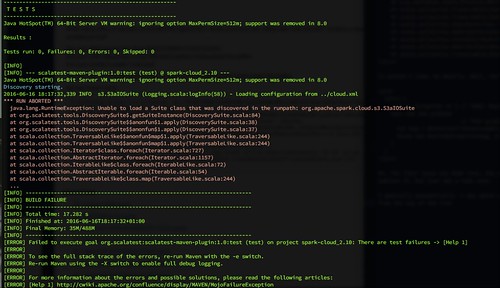 What am I doing today? End to end performance testing of the new S3A implementation. Or not.


So, a test case wouldn't load. No details. Well, let's paste in the stack trace and see if the IDE will tell me where things went wrong.


Ah. The inner cause has been lost, whoever wrote the test runner knew this as someone called "Jess" complained. And the reaction was not to address it, but just add a TODO todo note.

I generally automatically -1 any patch whose test cases lose exception data. This test runner isn't quite doing that, but it is cutting the message from the top of the list, relying on the test reporter to display the whole list. Which, clearly, the scalatest reporter is not doing.

Having written a distributed JUnit runner in the distant path, I understand a key issue with test runners: they're hard to test. You essentially have to bootstrap your own testing infrastructure, then generate the failure conditions you see from tests. Which does mean: you get to stare at the stack traces. I think what we are seeing here is evidence that whoever is developing scalatest doesn't use maven.

This also shows what's wrong with TODO notes: they're technical debt you forget about.

At least if you keep adding more and more things to your issue tracker, you've got a nice shared graph of filed vs completed. Whose project tracks the number of TODO line items in a source tree?

(Update: found the problem. The test in question had a base class with an after{} cleanup clause, as did a mixed in trait. Whatever error message scalatest raises at that point, well, it doesn't make it through the testrunner unscathed)