Can I have password for my hotel room's shower?

A conversation you never get at a hotel when you check in:
"how many people will be having showers?"
"oh, three of us"
"OK, here are three vouchers for hot water. Keep them handy as you'll need to retype them at random points in the day"
"thank you. Is the login screen in a random EU language and in a font that looks really tiny when I try to enter it, with a random set of characters that are near impossible to type reliably on an on-screen keyboard especially as the UI immediately converts them to * symbols out of a misguided fear that someone will be looking over my shoulder trying to steal some shower-time?"
"Why, yes -how very perceptive of you. Oh, one more thing -hot water quotas"
"hot water quotas?"
"yes, every voucher is good for 100 Litres of water/day. If you go over that rate then you will be billed at 20 c/Litre."
That's a lot!
"Yes, we recommend you only have quick showers. But don't worry, the flow rate of the shower is very low on this hot water scheme, so you can still have three minutes worth of showering without having to worry"
"'this' hot water scheme?"
"yes -you can buy a premium-hot-water-upgrade that not only gives you 500L/day, it doubles the flow rate of the shower.
"oh, I think I will just go to the cafe round the corner -they have free hot water without any need for a login"
"if that is what you want. Is there anything else?"
"Yes, where is my room?"
"It's on the 17 floor -the stairs are over there. With your luggage you could get everything up in two goes -it will only take about fifteen minutes"
"17 floors! Fifteen Minutes! Don't you have a lift?"
"Ah -do you mean our premium automated floor-transport service?  Why yes, we do have one. It won't even add much to your bill. Would you like to buy a login? First -how many people will plan on using the lift every day -and how many times?
Posted by SteveL at 11:26 No comments:

LG: this is not your television -certainly not your kids'

If there's one difference between the current "internet of things" concept with predecessors: ubiquitous computing, JINI, cooltown, etc, it is that it is  not just devices with internet connectivity, there's a presumption that those devices are generating data for remote systems, and making use of that processed data.

This can be a great thing. Devices with integrated awareness of the global aggregate datasets have a great potential to benefit the owners, myself included. And I'm confident that when that data starts to be collected, it'll be in Hadoop clusters, code I've help author.

But we need to start thinking now about how to deliver an Internet of Things-that-benefit-the owner. If the connectivity and data analysis is designed to benefit someone else, then its gone from a utility to a threat.

It is critical that we make sure that the emergence of the "Internet of Things" does not become perceived as a threat to those of us who who own those things. If not, the vision and opportunity will not be realised. Which is why I'm starting to worry about my television -to the extent that not only am I not applying a new system update which includes a critical 'terms and conditions update", I'm thinking of composing a letter to the uk Information Commissioners Office on its topic.

This a 16 month old telly, one I first reviewed in 2013, where I implied its "smart" features were like AOL's or those 1998-era home PCs pre-cluttered with junk you didn't want.

Later on last year, it turned out that LG Smart TVs were discreetly uploading terrestrial TV watching data, along with USB filenames, and that it's privacy policy considered such viewing data anonymous.

LG got some bad press there, which they are reacting to with that new upgrade -disabling smart TV features until you agree to its new policy. Apply the system upgrade and iPlayer gets disabled until you consent to the new policy -one that pretty much enumerates any possible way to extract information about the user short of videoing everything you do.

accept it or the device doesn't work: "in order to gain access to the full range of Smart TV services, you must agree to our Privacy Policy, which facilitates a greater exchange of information between your LG Smart TV and our systems.". That's for access to BBC iPlayer and NetFlix -third party services.

Viewing information includes data from HDMI devices: Viewing Information may include the name of the channel or program watched, requests to view content, the terms you use to search for content, details of actions taken while viewing (e.g., play, stop, pause, etc.), the duration that content was watched, input method (RF, Component, HDMI) and search queries.

You opt out of all EU data protection: "By agreeing to this Privacy Policy you expressly consent to us and our business associates and suppliers processing your data in any jurisdiction"

Protecting the privacy of children is important to us. For that reason, none of our Smart TV services are directed at anyone under 13 and they are not structured specifically to attract anyone under 13. We also do not knowingly collect or maintain personal information from users who are under 13. Should we learn or be notified that we have collected information from users under the age of 13, we will promptly delete such personal information.


This is something that nobody could say with a straight face. The privacy policy states that it has the right to monitor all terrestrial TV viewing -including CBBC, CBeebies and other kids channels- and push that upstream. The "viewing information" also includes information on external inputs, so perhaps even playing content from a games console is monitored. 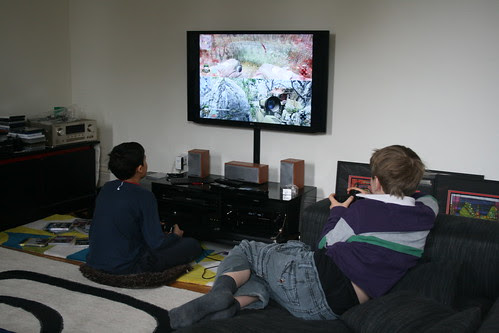 This is clearly an illegal use of a television: two children are trying to play a game on it. Which -for better or worse- children do. And yet it is now something that LG are pretending their "smart TV is not for"

Someone should tell the marketing department that children can't use Smart TVs, as their UK site says otherwise, with that phrase "LG Smart TV's Game World provides family entertainment.". Maybe they mean " families where all the kids are over 13".  Except also on that page,"Enjoy hours of free 3D content including documentaries, sports, kids and music concerts and rent the latest 3D Disney movies exclusively with LG Smart TV.". We have actually operated a say-no-to-Disney policy for 12 years, but I believe that they do target children under the age of thirteen.

Any assertion that the TVs advanced features aren't there for use by children aged twelve and under are bogus -and the site and marketing shows this. The fact that providers like Netflix and iPlayer have kids content shows they are targeting children. If LG didn't want kids to use that content, they'd have approached the organisations and said "leave the kids content out on our machines"

1. I'm not applying the update, so haven't accepted the T&C changes. I wonder what's going to happen there? Is everything suddenly going to stop working in a big server-side switch, or will I just be assumed to have accepted -and my data will be collected as if I have agreed.

2. I'm debating contacting LG to say "a twelve year old uses our television, please stop collecting data on it". This would really put them on the spot to see how they react.

3. I'm not happy about the data-out-of-EU policy. I know web sites -remote servers- have such a policy. But can consumer goods, bought at a shop down the road have a set of T&Cs that say to work all EU data protection laws have to be discarded?

What happens on these smart TVs is important -it's an example of how a traditional offline  consumer device is being wired up to the rest of the net -and we need to define now what everyone's expectations should be. We consumers should expect to be the owners of the machines -and in control of the data. Vendors of the devices have opportunities to make great uses of the data -but they have to do it in a way that bring tangible benefit. Better advertising placement on a TV you've bought isn't such a benefit -at least to me. And if it is -why isn't it on the product web pages?

LG are being leading edge here -but right now they are almost becoming a "what not to do" story. And with every update to their firmware, things only get worse
Posted by SteveL at 21:22 No comments:

One under-reported aspect of the Android 4.4 release is that it adds -by default apparently- searches inside your contacts. 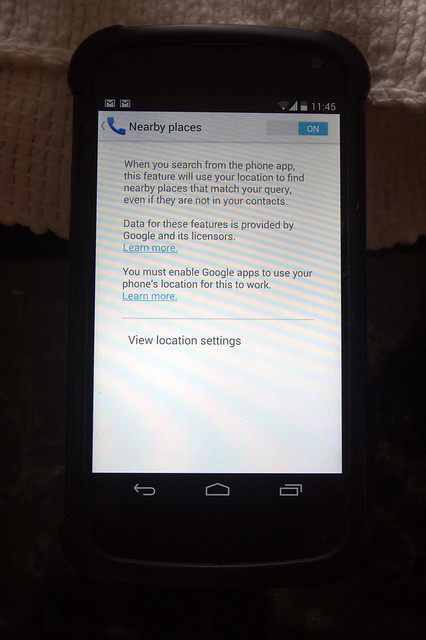 That is, whereas before you had a list of people you wanted to phone, which you could search and then call. now it can also include "nearby places that include your query"

A key point is being missed here. When I start typing in a name of someone in the contacts list, I am not trying to "query" something, just do a lookup of people in small table. And if there isn't a match there, it is not that I want the search broadened -it is that I have mistyped someones name and would like some fuzzy matching.

What do I get then, if I mistype "andes" instead of the surname of a friend, "anders" 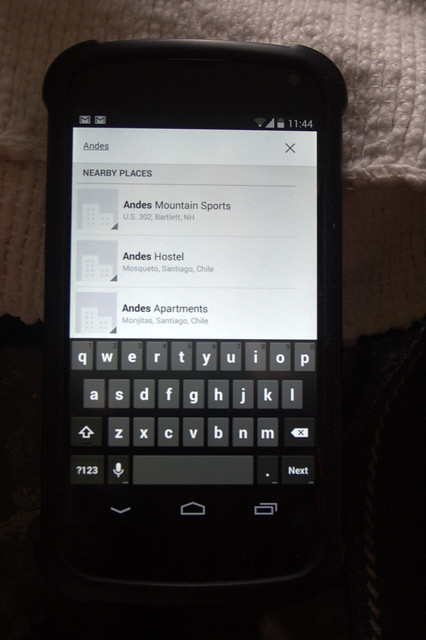 I don't get a "showing results for anders" dialog the way you get if you misspell something in google search.

No, I get a hostel and a set of apartments in Santiago, Chile, and a mountain sports shop in New Hampshire.

None of these are nearby by any definition of "nearby" except that used by astronomers, where "inner solar system'" is considered close.

Maybe, just maybe, if the "search nearby places" feature did actually search nearby then it could be useful, though as there are so many other search bars in an android phone (top of the front page, in maps, in chrome) that I have never stared at the phone thinking "I wonder if there is a way to look up things on the web from here?" I serious doubt that.

But there is no way that I can conceivably consider returning two hotels in south america and a US shop as a nearby search, it is no use whatsoever.

I find it hard to conceive what developer team managed to come up with a search threshold where the cutoff for "not nearby" appears to be somewhere outside the orbit of the moon. No doubt there's some bug where the fact that java byte is and so setting one to 180 degrees would result in the number being chopped down, but really, couldn't the QA write a test that entered a key term not in contacts -and fail the test if the top three results included one or more entry on a different continent, or even hemisphere.