It's been a warm-but-damp summer in Bristol, and the vegetation in the local woods has been growing well. This means the bramble and hawthorn branches have been making their way out of the undergrowth and into the light —more specifically the light available in the mountain bike trails.

Being as both these plant's branches have spiky bits on them, the fact that they are growing onto the trails hurts, especially if you are trying to get round corners fast. And, if anyone is going round the trail without sunglasses they run a risk of getting hurt in/near the eye.

I do always wear sunglasses, but the limitations on taking the fast line though the trails hurts, and as there a lot of families out right now, I don't want the kids to get too scraped.

So on Saturday morning, much to the amazement of my wife, I picked up the gardening shears. Not to do anything in our garden though —to take to the woods with me. 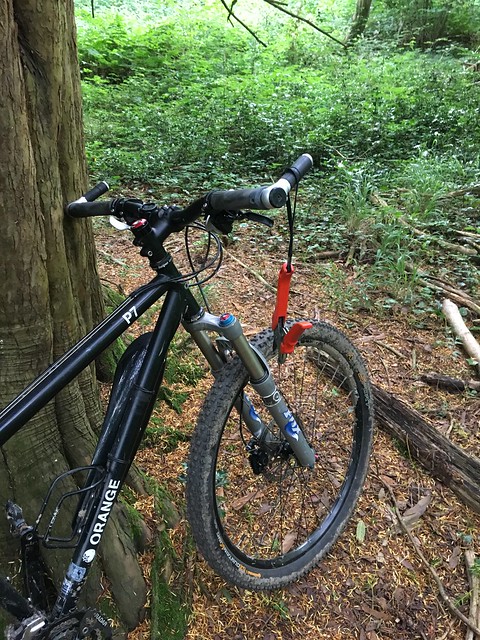 Findings
I appreciate the outcome my own work, I can now go round at speed, only picking up scrapes on the forearms on the third of the trail that nobody has trimmed yet. I actually cut back on the inside of the corners there for less damage on the racing line, while cutting the outside and face height bits for the families. Now they can have more fun on the weekends, I can do my fast work weekday lunchtimes. 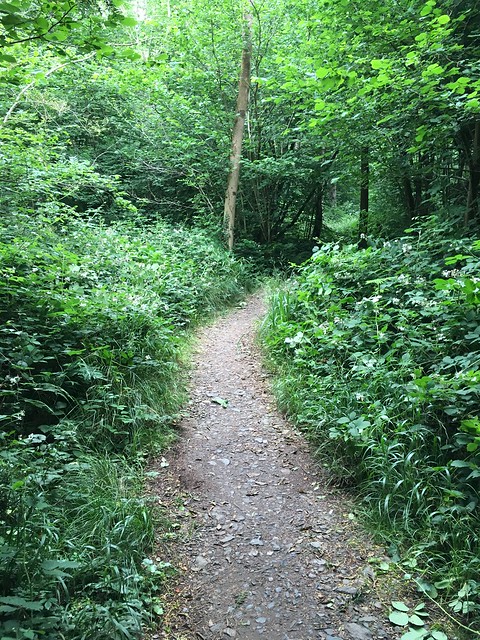 They can live their lives with fewer wailing children, and I've partially achieved my goal of less blood emitted per iteration. I'll probably finish it off with the final 1/3 at some point, maybe mid-august, as I can't rely on anyone else.

There are no trail pixies but but what we make 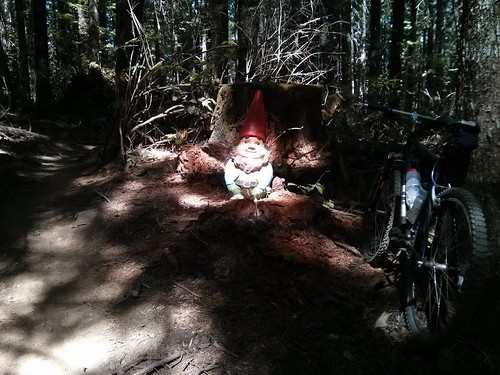 Which brings me to OSS projects, especially patches and bug reports in Hadoop.

I really hate it when my patches get completely ignored, big or small.

Take YARN-679 for example. Wrap up piece of YARN-117, code has celebrated its third birthday. Number of reviewers. Zero. I know its a big patch, but it's designed to produce a generic entry point for YARN services with reflection based loading of config files (you can ask for HiveConfig and HBaseConfig too, see), interrupt handling which even remembers if its been called once, so on the second control-C bypasses the shutdown hooks (assumption: they've blocked on some IPC-retry chatter with a now-absent NN), and bail out fast. Everything designed to support exit codes, subclass points for testability. This should be the entry point for every single YARN service, and it hasn't had a single comment by anyone. How does that make me feel. Utterly Ignored —even by colleagues. I do, at least, understand what else they are working on...it's not like there is a room full of patch reviewers saying "there are no patches to review —let's just go home early". All the people with the ability to review the patches have so many commitments of their own, that the time to review they can allocate is called "weekends".

And as a result, I have a list of patches awaiting review and commit, patches which are not only big diffs, they are trivial ones which fix things like NPEs in reporting errors returned over RPC. That's a 3KB patch, reaching the age where, at least with my own child, we were looking at nursery schools. Nothing strategic, something useful when things go wrong. Ignored.

That's what really frustrates me: small problems, small patches, nobody looks at it.

And I'm as guilty as the rest. We provide feedback on some patch-in-progress, then get distracted and never do the final housekeeping. I feel bad here, precisely because I understand the frustration.

Alongside "old, neglected patches", there are "old, neglected bugs". Take, for an example HADOOP-3733 "s3:" URLs break when Secret Key contains a slash, even if encoded. Stuart Sierra gave a good view of the history from his perspective.

The bug was filed in 2008
Conclusions


I mostly concur. Especially in the S3 support, where historically the only FTEs working on it were Amazon, and they have their own codebase. In ASF Hadoop, Tom White started the code, and it's slowly evolved, but it's generally been left to various end users to work on.

Patch submission is also complicated by the fact that for security reasons, Jenkins doesn't test the stuff. We've had enough problems of people under-testing their patches here that there is a strictly enforced policy of "tell us which infrastructure you tested against". The calling out of "name the endpoint" turns out to be far better at triggering honest responses than "say that you tested this". And yes, we are just as strict with our colleagues. A full test run of the hadoop-aws module takes 10-15 minutes, much better than the 30 minutes it used to take, but still means that any review of a patch is time consuming.

I would normally estimate the time to review an S3 patch to take 1-2 hours. And, until a few of us sat down to work on S3A functionality and performance against Hive and Spark, those 1-2 hours were going weekend time only. Which is why I didn't do enough reviewing.

Returning to the S3 "/", problem
Finally, and this is the reason why it didn't surface with many of us, even though we had "/" in the secret is because the problem only arises if you put your AWS secrets in the URL itself, as s3a://AWSID:secret-aws-key@bucket

That is: if your filesystem URI contains secrets, which, if leaked —threaten the privacy and integrity of your data and is at risk of running up large bills, then, if the secret has a "/", the URL doesn't authenticate.

This is not actually an action I would recommend. Why? Because throughout the Hadoop codebase we assume that filesystem URIs do not contain secrets. They get logged, they get included in error messages, they make their way into stack traces that can go into bug reports. AWS credentials are too important to be sticking in URLs.

Once I realised people were doing this, I did put aside a morning to fix things. Not so much fixing the encoding of  "/" in the secrets (and accidentally breaking the encoding of "+" in the process), but:
That's not just an idle "may be removed" threat. In HADOOP-13252, you can declare which AWS credential providers to support in S3A, be it your own, conf-file, env var, IAM, and others. If you start doing this, your ability to embed secrets in s3a URLs goes away. Assumption: if people know what they are doing, they shouldn't be doing things so insecure.

Anyway, I'm glad my effort fixing the issue is appreciated. I also share everyone's frustration with neglected patches, as it wastes my effort and leaves the bugs unfixed, features ignored.

We need another bug bash. And I need to give that final third of the Yertiz trail a trim.
Posted by SteveL at 13:17 No comments:

Early in July I did a bike ride with many other parents from Alexander's primary school; bikes loaded into a truck and driven down to Bergerac, us flying out to the airport, then riding south at 60-100 miles/day, ending up in San Sebastian, Spain, skirting the pyrenees carefully.

This was the first time I'd been at the French/Spanish border of Hendaye/Irun for 26 years. Then we loaded the bikes onto a train in London, then three days later a train+ferry+overnight train to get to Hendaye station, again getting on our bikes at the Atlantic seaside —this time, August 1990. 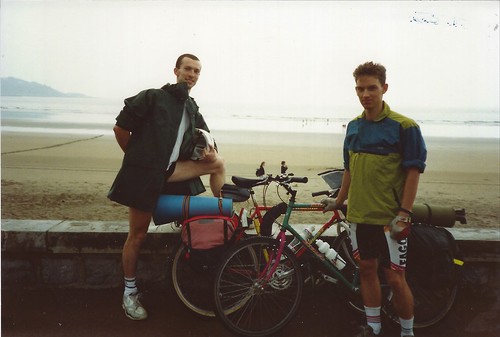 As usual, not the combined weight of rider+bike+luggage is constant, even though now the bike is a Ti+Carbon CX machine, and then it was a steel MTB with panniers full of camping equipment and a change of clothes. (*)

Two weeks later, after zig-zagging up the highest roads in the Pyrenees, wobbling in and out of France and Span, we got to the Mediterranean Sea, somewhat the worse for wear. 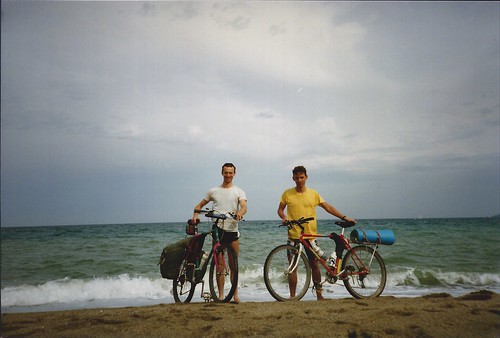 Return journey: similar, preload the bikes, overnight train to paris, onboard to London, pickup the bikes and then further trains west. 24+ hours, at least.


In 1990, that was a major expedition. I got a credit card for the first time, changed money into FFr and Spanish Pesetas, took some travellers checks to change money as went down. Maps: paper things hooked onto the handlebars. Camera: my first 35mm autofocus Canon compact camera. It had a little self timer, hence the various staged team-selfie pics. The bikes were generations behind what I have now, as were: The lights, the camping kit, much of the clothing. Communications: postcards.

This time, it's not a expedition, it's just a week on the mainland. Money? Euros left over from my June trip to Berlin, topping up at ATMs. Camera? on the phone plus a compact digital camera with proper zoom lens. Maps: Garmin GPS and offline google maps. Communications: phone with free phone and data roaming round Europe. Luggage: cards, a bag full of chargers and miscellaneous electronics. Riders: much, much worse. If I'd had Strava then, today's numbers would be so bad I'd give up in despair.

And now: not a multi-train expedition, a quick holiday from the local airport, followed by a few days in San Sebastian and Bilbao, back home from another direct flight, home in two hours, then driving over to Portsmouth to collect a child: a low effort, low stress day. It took as long to drive to Portsmouth as it did from our Bilbao hotel to our Bristol house.


This was not a trip to foreign lands where money is different, where a passport is needed to be handy as you cross the borders, where things are exotic. We are in Europe now, and have moved on from the neighbouring countries being far, far, away.

Except now: things have changed. The rate of decay of the UKP:EUR exchange rate meant that we had to run to the ATMs, fearing that the rate would be worse if waited 24h. Where today, we could roam freely as part of a continent, the decisions of fellow UK voters means that we're taking a step backwards as a nation.

While that exoticness 26 years ago made for more of a wilder expedition, we have gained so much. Yet now Britain is turning its back on it in exchange for a social and economic fiasco. It's going to be a disaster, and when that happens, the people to blame: the paper proprietors, the politicians who lied —they'll get away with it. The country will suffer, worse of all those people in the forgotten towns who believed the lies. Well: they voted for it —their fault. If need be, I can walk away from the country, over to the continent which I consider myself a full citizen of.

(*) We had a regime of wash the previous day's clothes in the morning, hang to dry on the bike, wear the fresh stuff in the evening and again on the following day's ride. It worked, though on dusty days things got a bit gritty.
Posted by SteveL at 12:38 No comments: