British Airways: Airline of the 1%

We're sitting in SeaTac, joyous airport of the PNW, waiting for a BA flight to the UK that's running an hour late. I'm playing with the manual aperture and exposure settings on the (compact) camera, the rest of the family fiddling with some other consumer electronics. 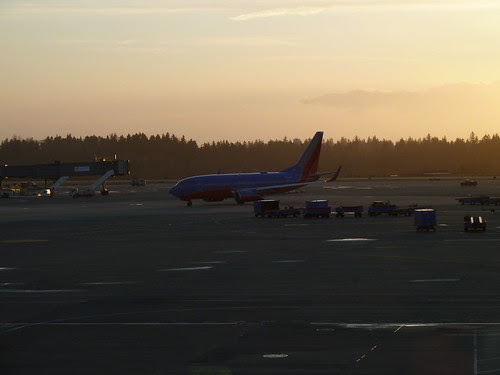 A "fat family" sits down nearby. I think it's everyone's right to eat as much as they like, but I always feel sorry for the kids in these situations, as they get pushed into a unhealthy lifestyle from birth. What I do worry about is fat families on flights.

If they sit next to you, they end up overrunning your seat, not because they want to, but because they have no choice, not in BA fourth class seating. If they sit in the row in front then even when they sit down the millimetres-thick seat bends back, and once the seat belt light comes off they will hit the recline button, and you yourself have a tenth of a second to hit your own recline button before your kneecaps get crushed. And if they sit behind you, you know they will heave themselves up on the back of your seat in some combined groan and hacking cough, while they trundle off to the toilet. As they will do every twenty minutes for the entire transatlantic flight, as incontinence seems to go with the weight.

Needless to say, I was concerned. We'd checked in and chosen our seats 23h50 minutes earlier, not wanting to pay the £20+ plus premium for the right to choose a seat more than 24h in advance -and now I was worried where these three were going to end up. With only twenty rows in "world traveller" class, the probability of having their group of three adjoining our group of three is about 1 in 30, enough to worry about given the consequences.

Eventually the plane loads, and we stroll down the 747. This is where I get the good news: the father of the three is battened down in business class, not looking too happy as he is forced to squeeze into their biz-class cubbyholes, solid on three sides and so not ideal if you don't fit. The wife and daughter, they are in third class, "world traveller plus", the one where you actually have enough room to open a 12" netbook without fear of the passenger in front hitting the recline button and shattering your LCD. I can carry on back on the rear of the plane.

Eight or so hours later, we arrive. This is after having crossed the Arctic with the cabin crew requesting that everyone pull shut their blinds to stop people seeing the frozen-planet class scenery, instead consuming sub-DIVX quality videos on screens smaller than smart phones, screens driven by hardware "hidden" under every seat, hidden where you bump into it the moment you stretch your legs to avoid your kneecaps getting squashed. As we land, the cabin crew request that the premium travellers return their personal DVD players, finish their last round of golf, get out of the pool, return their champagne glasses. Those of us in the back are asked to take a deep breath then on the count of three everyone should flip their seat to upright.

We get to the airport, and eventually those of us at the rear get to disembark. As we do so, we get to go through world traveller plus, then through business class and up to the main fuselage's first class. All of these seats are empty and show no signs of use apart from those used by the fat family. Certainly they got value for money, but consider this: the rear third of the plane, world traveller, was 100% full, 10 people per row for 20 rows: 200 passengers. The front third of the main fuselage: three people. If the upper floor was equally populated, there may well have been a whole five people in the entire premium section of the plane.

Well, those people got something for their money: space. But with 100% utilisation in the back seating area, it was probably oversubscribed. While the premium areas were effectively wasted. You can't make money if 3/4 of the body of the plane has five passengers.

Yet BA have chosen a seat layout for their aeroplanes that are biased towards premium passengers, especially business class. A seat layout that does not -for the SEA-LHR route- appear to be working.

Which makes me think. BA's business model depends on people with the personal or organisational money to afford to pay the premium for luxuries above and beyond the basic "get from one country to another". Meanwhile, those of us in the back get to experience something a bit like the Occupy Wall Street camp without the leg room and with a cabin crew about a friendly a the NYPD.

BA is the airline of the 1%. They don't make money from the 99%; they have optimised the interiors of their planes for that 1%, while making things worse for the 99% in order to make that 1% feel better about their purchasing decisions. Indeed, I suspect that we in the back aren't there to bring in profit, we are just there to cover a bit of the costs, and to make the premium travellers feel glad about not being there with us. Just as the cabin announcements "we shall give business class travellers their four course meal shortly, with a choice of wines" are there to make us feel bad for having gone economy, the announcements for us are designed to make the premium travellers feel smug "economy class passengers will get a small plate giving them whatever is left in the box of lukewarm edibles".

There you have it. British Airways: the airline of the 1%. 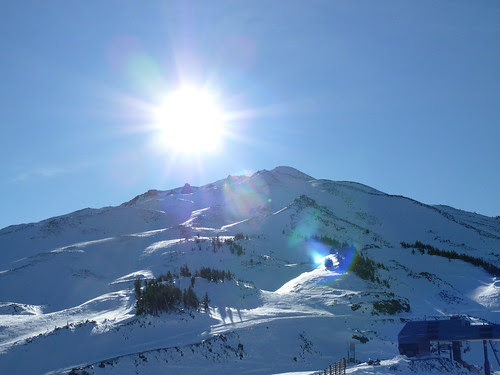 I also spent time growing what could be roughly called a beard, in some half-hearted cargo-cult attempt to stay ready for the cold of some winter skiing -and so hope that more snow arrived. 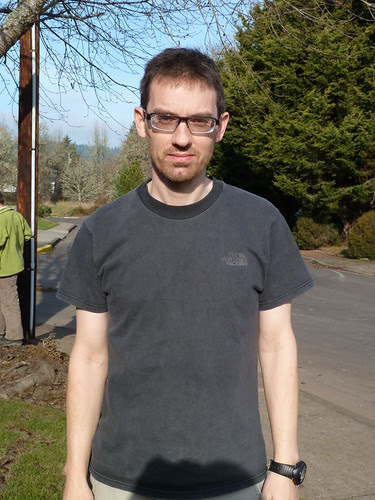 In the background you can see the child I own embracing his Oregonian birthright by holding an orange chainsaw. It wasn't switched on, but later that afternoon he did go out to the woods and cut down a tree for Christmas. 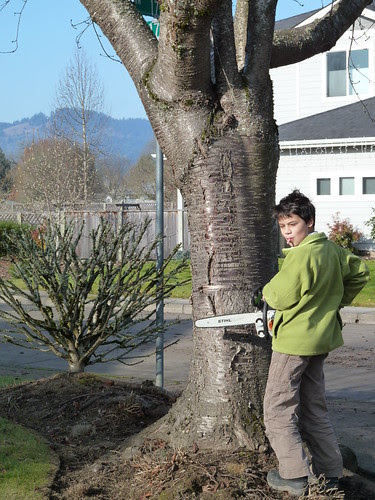 Just as every French village has its patisserie, every English village a former pub converted into four authentic rural-look flats, every small town in Oregon has a store with a bright orange logo above it: Stihl. They are the official vendors of deforestation tooling in the PNW.

The good news: there are still a lot of trees left -if there is one thing that hits you when you return to the state is just how many trees there are left. 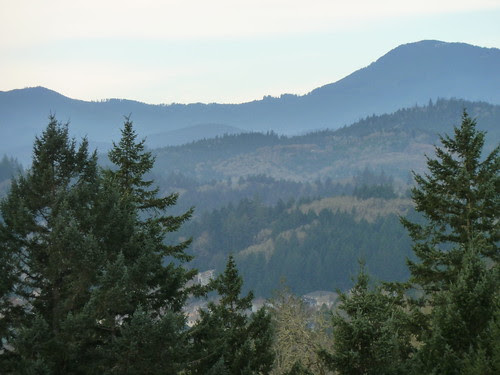 That's probably despite the best efforts of the inhabitants, rather than because.

That peak in the background: Mary's Peak. 4000' of ascent; on-road from the south, off-road from the north, and something I used to train on. Not having something like that within day-ride range makes you lazy, so it's nice to see it again, even if I didn't manage to get back up it.

The price of taking three weeks offline is the vast amount of emails to be flicked through. It's taken two days to clear the backlog and sit down to do something vaguely useful. Time to get busy.
Posted by SteveL at 12:51 No comments: