Since January I've been signing my git commits to the main Hadoop branches; along with Akira, Aaron and Allen we've been leading the way in trying to be more rigorous about authenticating our artifacts, in that gradual (and clearly futile) process to have some form of defensible INFOSEC policy on the development laptop (and ignoring homebrew, maven, sbt artifact installation,...).

For extra rigorousness, I've been using a Yubikey 4 for the signing: I don't have the secret key on my laptop *at all*, just the revocation secrets. To sign work, I use "git commit -S", the first commit of the day asks me to press the button and enter a PIN, from then on all I have to do to sign a commit is just press the button on the dongle plugged into a USB port on the monitor. Simple, seamless signing. 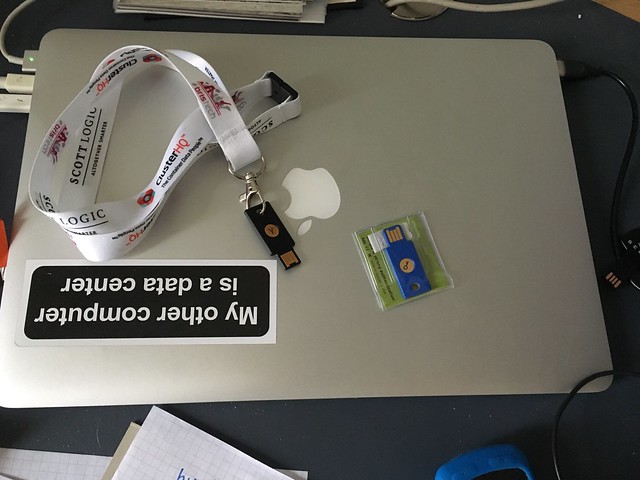 There was some news in the morning about a WPA2 vulnerability. I looked at the summary and opted not to worry; the patch status of consumer electronics on the WLAN is more significant a risk than the WiFI password. No problem there, more a moral "never trust a network". As for a hinted at RSA vulnerability, it was going to inevitably be of two forms "utter disaster there's no point worrying about" or "hypothetical and irrelevant to most of us." Which is where I wasn't quite right.

Later on in the afternoon, glancing at fb on the phone and what I should I see but a message from facebook.

"Your OpenPGP public key is weak. Please revoke it and generate a replacement"

That's not the usual FB message. I go over to a laptop, log in to facebook and look at my settings: yes, I've pasted the public key in there. Not because I want encrypted comms with FB, but so that people can see if they really want to; part of my "publish the key broadly" program, as I've been trying to cross-sign/cross-trust other ASF committers' keys.

Then over to twitter and computing news sites and yes, there is a bug in a GPG keygen library used in SoC parts, from Estonian ID cards to Yubikeys like mine. And as a result, it is possible for someone to take my public key and generate the private one. While the vulnerability is public, the exact algorithm to regenerate the private key isn't so I have a bit of time left to kill my key. Which I do, and place an order for a replacement key (which has arrived)

And here's the problem. Git treats the revocation of a key as a sign that every single signature most now be untrusted. 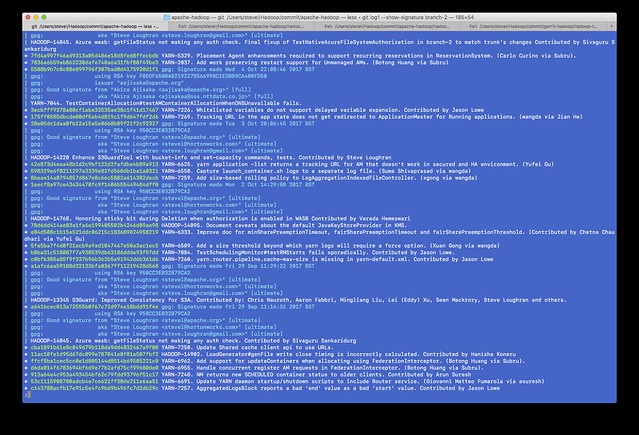 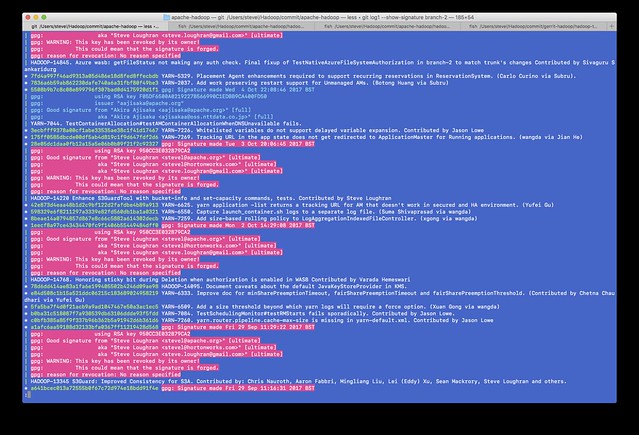 You see the difference? All my commits are now considered suspect. Anyone doing a log --show-signature will now actually get more warnings about the commits I signed than all those commits by other people which are not signed at all. Even worse, if someone were to ever try to do a full validation of the commit path at any time in the future is now going to see this. For the entire history of the git repo, those commits of mine are going to show up untrusted.

Given the way that git overreacts to key revocation, I didn't do this right.

What I should have done is simpler: force-expired the key by changing its expiry date the current date/time and pushing up the updated public key to the servers. As people update their keytabs from the servers, they'll see that the key isn't valid for signing new data, but that all commits issued by the user are marked as valid-at-the-time-but-with-an-expired-key. Key revocation would be reserved for the real emergency, "someone has my key and is actively using it".

I now have a new key, and will be rolling it out, This time I'm thinking ofr rolling my signing key every year, so that if I ever do have to revoke a key, it's only the last year's worth of commits which will be invalidated.
Posted by SteveL at 18:09 No comments: