Tilehurst? Where is Tilehurst and why does google maps care about it?

Google are being asked hard questions in Parliament about their UK tax setup.

I think the politicians are missing an opportunity to ask them the question that I'm always wondering: where is Tilehurst and why does google maps think it is so special.

Here is a google maps view of the UK 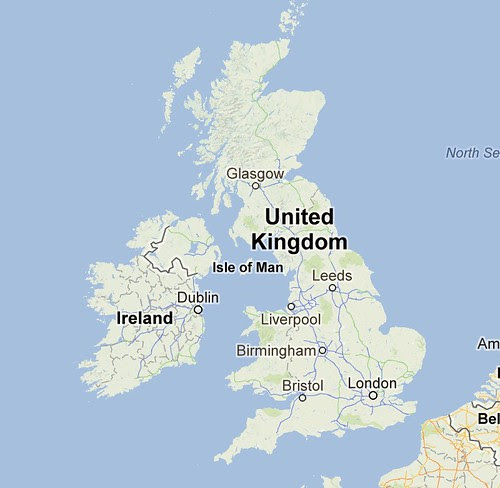 It has Bristol on it, but not Portsmouth or Cardiff. Its a always a mystery in Bristol while Pompey gets a dot on the BBC weather map, as does BRS's nearby rival, Cardiff. In the google map, Edinburgh and Manchester are the ones being left out.

But that is nothing compared to the Tilehurst question. Specifically : why?

Look what happens when you click to zoom in one notch. 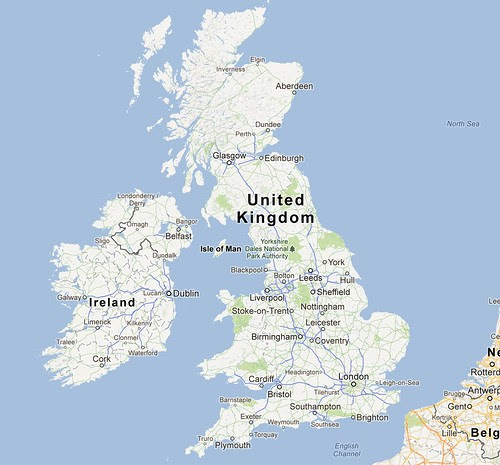 Edinburgh exists, along with pretty much everything north of their excluding Mallaig, which is something all visitors to Scotland should do when laying out an itinerary.

And what is there between Bristol and London. One town merits a mention. Tilehurst.

Apart from this mention of Tilehurst, I have no data on whether or not this town actually exists. It's not on any motorway exits on the M4, no train stations, no buses from Bristol. I have never heard it mentioned in any conversation whatsoever.

Why then does Google Maps think that it is more important than, say, Reading, which meets all of the above criteria (admittedly, never in conversations that speak positively of it), Oxford, which people outside the UK have heard of.

No, Tilehurst it is.

It could be some bizarre quirk of the layout algorithm that picks a random place ignoring things like nearby population numbers or using M-way exit signs, mentions in pagerank or knowledge of public transport.

I think it could just be some spoof town made up to catch out people who have been copying map data from google maps without accreditation. If some map or tourist guide mentions Tilehurst, the google maps team will know that they are using Google map data and immediately demand some financial recompense, routed through the Ireland subsidiary.

There's only one way to be sure: using this resolution map as the cue, drive there and see what it is.
Posted by SteveL at 06:09 5 comments:

I'm in the bay area right now, and the new owner of a Google Nexus phone, which is very good at integrating with Google apps, including calendar, contacts and mail. It also runs Strava, the defacto standard app for logging your cycling, then uploading the results to compare with others. I'm assuming its running Hadoop at the back end, given their Platform Product Manager is one of the ex-Yahoo! Hadoop team.

If this is the case, Hadoop is indirectly bringing me bad news.

Yesterday I went out on the folding bike and climbed the Santa Cruz mountains, west of the Bay Area flatlands. 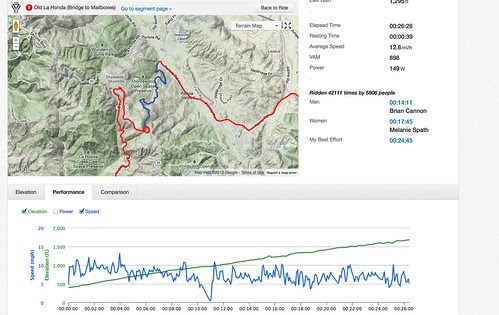 It's a great steep climb from behind Palo Alto up to the skyline ridge, narrow and free from almost all traffic bar the many other locals who felt that Saturday morning was to nice to waste. For me: 26 minutes climbing, 40s of rest -fast enough to come in the top 50% of the day of everyone else running the app, and hence 2233 of 5810 of everyone who has ever done it. Not bad work. 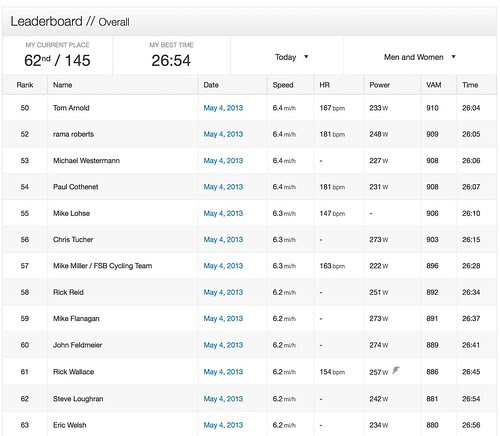 If there's a warning sign, it is that people faster than me have a quoted average power output less then my 257W -and as they all took less time, that means that their total exertion is less than my 412kJ. Why do those ahead of me come in lower? It means they are carrying less excess weight.

If I'd stopped there and descended (carefully, that bikes 20" rims overheat), I could get back and feel relatively smug.

Only this time I descended the far side and climbed back up "Alpine West" -first time ever. And it destroyed me 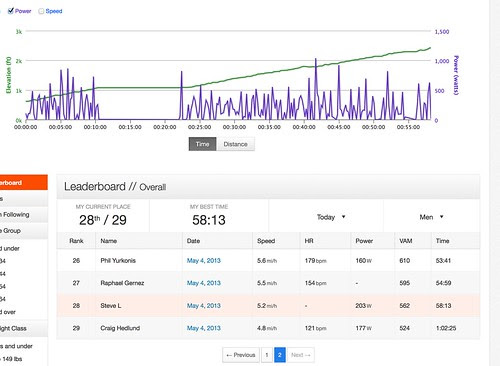 It was long. I stopped for lunch partway up, but needed that rest, and continued, expecting the overall climb to be on a par with the earlier one. It wasn't. In fact the total climb was double, 600m. Which I was not ready for. Unlike the morning, where I'd got to pass lots of people, there the road was near empty -and those people I did meet were going past me. The rate of ascent, 562m, is less than the 600m/hour rate we used to plan for when crossing the alps -a rate sustained over a week or more, carrying panniers. Not today.

The message from Strava then, which means something Hadoop worked out, is that I am overweight and completely lacking in endurance. It' doesn't quite spell it out, but the graphs bring the message

This is datamining at work.