Spark uses Scalatest for its testing.

I alternate between "really liking this" and "bemoaning aspects of it".

Overall: I think the test language is better than JUnit, especially once you embrace more of the scala language. But the test execution could be improved, especially maven integration, and, to a lesser extent, that test reporting. 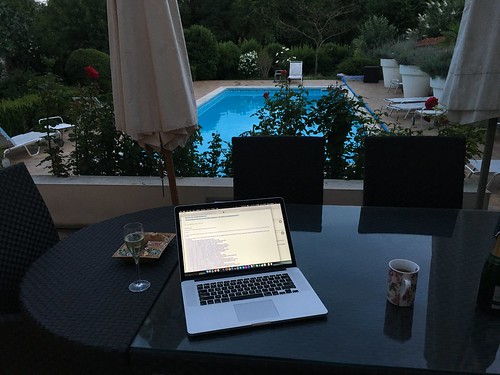 This does a busy wait for the closure to complete (i.e. not throw an exception), policies include exponential backoff.

Pro: easy to write clauses in a test case which block until a state is reached or things timeout

Con: there's no way by default for those clauses to declare that they will never complete. That happens, especially if you are waiting for some state such as the number of events to be exactly 3 in a queue. If the queue size goes to 4, it's never going to drop to 3, so the clause could fail fast.

I think the fix there would be to define a specific "unrecoverable assertion failure" exception and raise that, have "eventually()" not swallow them.

This does good reporting on what the values are on an equality failure. It does need rigorousness about the order; I follow the junit assertEquals policy of expected-value-first. Projects really need a style guide/policy here.

Weakness: no typechecking at compile time. Better get those types right. Though as your tests should run through all assertions unless it is somehow nondeterministic, you'll find out soon enough.

Here there's a straightforward catch of a specific type (and failure raised if it didn't happen). As the exception is returned, the test case can continue. And with string formatting with the s"" syntax, reasonable groovy-esque diagnostics.


Matchers and the declarative specification syntax

Ignoring the fact that the RFC2517 means that the syntax ought to be "must" and not "should", this style is fairly similar to JUnit 4 matchers, which is not something I ever do much of.

While seems and easy way to declare things to run before tests, it doesn't work well with traits/mixins. In contrast, having setup() and teardown() methods, combined with Scala's strict order of evaluating traits and what what "super.setup()" would mean in a trait, allows you to write tests with traits where different traits can execute their setup/teardown clauses in a deterministic manner. Note that JUnit's before/after stuff is also a bit ambiguous, so it's not a denunciation of Scalatest here —more a commentary of the setup problem.


I've ended up doing this in the tests for spark-cloud, writing a conditional ctest() function. The secret there is to know that the test(name) { closure } declaration is not declaring a method, as in JUnit, but simply declaring an invocation of the test() method —an invocation which takes place during the construction of an instance of the test suite. There is nothing to stop you wrapping that call in other mechanisms: extra conditions, dynamic parameters, etc. It's only a closure, you understand.

Needs better wildcard and test suite declarations. I've only just discovered the ability to include a string in the name of the test case to run:

The test reporter "helpfully" strips off the stack trace on assertion failures, so you don't get the full stack. This seems a good idea, except in the special case "you have the assertions inside a method which your test cases call". Do that and you suddenly lose the ability to detect what's wrong because the stack trace has been stripped —all you get is the name of the utility method. Just give us the full stack and stop trying to be clever..


Here, then , is my ctest() function to declare a test which is conditional on the state of the entire suite, and an optional extra per-test predicate

What is critical to know is that this ctest() function, is not declaring any function/method in the test suite. It's just a function invoked in the suite's constructor,  interpreted in the order of listing in the file, expected to register the associated closure for invocation.

The normal test() function registers the test; the new ctest() function takes some extra detail text (logged @ info, and when I do something about reporting, may make it to the HTML), a condition for optional execution and that closure. There's also a suite-wide enabled() predicate. This is something which can be subclassed or mixed-in through a tratit for configurable execution. As an example. there are object store tests for both S3A and Azure, which are only enabled if the relevant credentials have been supplied.

The enabled predicate is true if the S3aTestSetup mixin was happy (that is, I've added credentials), and a CSV test file is defined. Then we run an example application, verifying
its exit code is 0.

Things I'm yet to explore

How to get the most out of scalatest

(at least as far as I've learned so far)

Most of all: read the underlying source code. It's there. Look at what test(name) { clause } does and follow it through. See how tests are executed. Think about how to take best advantage of that in your test suites.
Posted by SteveL at 11:15