Meltdown has made for an "interesting" week in computing, as everyone is learning about/revising their knowledge of Speculative Execution. FWIW, I'd recommend the latest version of Patterson and Hennessey, Computer Architecture A Quantitative Approach. Not just for its details on speculative execution, but because it is the best book on microprocessor architecture and design that anyone has ever written, and lovely to read. I could read it repeatedly and not get bored.(And I see I need to get the 6th edition!) 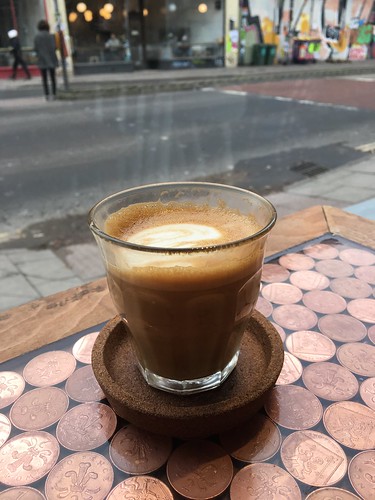 This weekend, rather than read Patterson and Hennessey(*) I had a go to see if you could implement the meltdown attack in Java, hence in mapreduce, spark, or other non-native JAR

My initial attempt failed provided the part only speculates one branch in.

More specifically "the range checking Java does on all array accesses blocks the standard exploit given steve's assumptions". You can speculatively execute the out of bounds query, but you can't read the second array at an offset which will trigger $L1 cache loading.

If there's a way to do a reference to two separate memory locations which doesn't trigger branching range checks, then you stand a chance of pulling it off. I tried that using the ? : operator pair, something like

This would do the move of the reference in the ongoing speculative branch, so, if "ref" was referenced in any way, trigger the resolution

In my experiment (2009 macbook pro with OSX Yosemite + latest java 8 early access release), a branch was generated ... but there are some refs in the open JDK JIRA to using CMOV, including the fact that hotspot compiler may be generating it if it things the probability of the move taking place is high enough.

Now the code is done, I might try on a Linux VM with Java 9 to see what is emitted

Anyway, I believe my first attempts failed within the context of this experiment.

Code-wise, this kept me busy on Sunday afternoon. I managed to twist my ankle quite badly on a broken paving stone on the way to patisserie on Saturday, so sat around for an hour drinking coffee in Stokes Croft, then limped home, with all forms of exercise crossed off the TODO list for the w/e. Time for a bit of Java coding instead, as a break for what I'd been doing over the holiday (C coding a version of Ping which outputs CSV data and a LaTeX paper on the S3A committers)

It took as much time trying get hold of the OS/X disassembler for generated code as it did coding the exploit. Why so? Oracle have replaced all links in Java.sun.net which would point to the reference dynamic library with a 302 to the base Java page telling you how lucky you are that Java is embedded in cars. Or you see a ref to on-stack-replacement on a page in Project Kenai, under a URL which starts with https://kenai.com/, point your browser there and end up on http://www.oracle.com/splash/kenai.com/decommissioning/index.html and the message "We're sorry the kenai.com site has closed."

All the history and knowledge on JVM internals and how to work there is gone. You can find the blog posts from four years ago on the topic, but the links to the tools are dead.

This is truly awful. It's the best argument I've seen for publishing this info as PDF files with DOI references, where you can move the artifact around, but citeseer will always find it. If the information doesn't last five years, then

The irony is, it means that because Oracle have killed all those inbound links to Java tools, they're telling the kind of developer who wants to know these things to go away. That's strategically short-sighted. I can understand why you'd want to keep the cost of site maintenance down, but really, breaking every single link? It's a major loss to the Java platform —especially as I couldn't even find a replacement.

I did manage to find a copy of the openjdk tarball people send you could D/L and run make on, but it was on a freebsd site, and even after a ./Configure && make, it broke trying to create a bsd dynlib. Then I checked out the full openjdk source tree, branch -8, installed the various tools and tried to build there. Again, some error. I ended up finding a copy of the needed hsdis-amd64.dylib library on Github, but I had to then spend some time looking at evolvedmicrobe's work &c to see if I could trust this to "probably" not be malware itself. I've replicated the JAR in the speculate module, BTW.

Anyway, once the disassembler was done and the other aspects of hotspot JIT compilation clear (if you can't see the method you wrote, run the loop a few thousand more times), I got to see some well annotated x86-64 assembler. Leaving me with a new problem: x86-64 assembler. It's a lot cleaner than classic 32 bit x86: having more registers does that, especially as it gives lots of scope for improving how function parameters and return values are managed.

What next? This is only a spare time bit of work, and now I'm back from my EU-length xmas break, I'm doing other things. Maybe next weekend I'll do some more. At least now I know that exploiting meltdown from the JVM is not going be straightforward.

Also I found it quite interesting playing with this, to see when the JVM kicks out native code, what it looks like. We code so far from the native hardware these days, its too "low level". But the new speculation-side-channel attacks have shown that you'd better understand modern CPU architectures, including how your high-level code gets compiled down.

I think I should submit a berlin buzzwords talk on this topic.

(*) It is traditional to swap the names of the author on every use. If you are a purist you have to remember the last order you used.
Posted by SteveL at 12:07